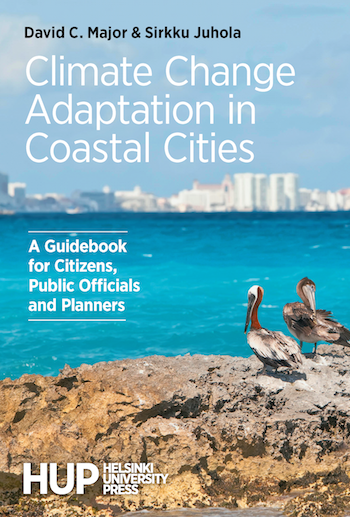 A Guidebook for Citizens, Public Officials and Planners

This guidebook presents a framework for climate adaptation planning for coastal cities, large and small, focused on the central roles of citizens, public officials, and planners. The book is designed to help all stakeholders in coastal cities understand and develop effective adaptation measures in a sustainable way. Within a framework of eight key planning steps, guidance is provided for stakeholders in the adaptation process from initial assessments of climate impacts to final planning.

The work sets out general principles and methods of adaptation to climate change for many types of coastal communities. Adaptation is seen throughout the work as a process that should take into account all coastal assets, including economic, environmental, social, cultural and historical assets, with due attention to disadvantaged communities. Among the adaptation elements covered in the book are: a review of the current climate situation; climate impacts and vulnerabilities; climate models and future scenarios; physical, economic, social and other characteristics of coastal cities and towns; the range of available adaptations, including management, infrastructure, and policy adaptations; evaluation of projects and programs; and working together to develop and finance adaptations.

Numerous tables are presented to help organize information and guide planning, and examples of adaptation challenges and opportunities are provided from both developed and developing coastal cities and towns. The volume is copiously illustrated, with extensive up-to-date references to provide the reader with additional sources of information.

David C. Major holds a PhD in Economics from Harvard University. He has been a faculty member at MIT and Clark University, and a long-time Senior Research Scientist at Columbia University (now retired). His scientific research focus is the adaptation of coastal cities and towns, large and small, to climate change.

Sirkku Juhola holds a PhD from the University of East Anglia, UK, and has worked in Japan, Sweden, and Finland. She is a Professor at the University of Helsinki, leading the Urban Environmental Policy Group. Her research interests focus on governance and decision-making, climate change policy, and climate risk. She is a member of the Climate Panel of Finland.

“Climate Change Adaptation in Coastal Cities is a useful manual for those engaged in planning for climate adaptation in large and small coastal cities across the world.

I especially like the positive, simple and step-by-step tone of the entire volume, moving from general principles to methods of adaptation for different types of coastal communities. I also welcome the book’s inclusive focus on the different roles that citizens, public officials and planners play in the climate adaptation process, and its emphasis on the vital need for stakeholders to work together to develop and implement adaptation strategies. The examples of adaptation challenges and opportunities as well as the many tables and illustrations further reinforce the value of the book.”

These are words or phrases in the text that have been automatically identified by the Named Entity Recognition and Disambiguation service, which provides Wikipedia (

) links for these entities.

How to cite this book

This book is distributed under the terms of the Creative Commons Attribution + Noncommercial 4.0 license. Copyright is retained by the author(s)

This book has been peer reviewed. See our Peer Review Policies for more information.